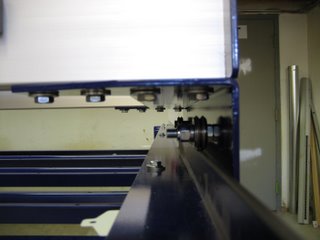 I don't know why people feel the need to anthropomorphize important objects in their lives by assigning proper names.

Yet I too feel the urge.

Yes I say. Let us give the Shopbot a name and we can coyly refer to him/her daily with a wink and nod as we talk about what 'Botty' or 'Betty' or 'BigDog' is up to.

It'll be fun and other people will join in and soon we'll all be saying, 'Conad can cut that acrylic up, lickety split!'

But then again, that's all pretty pointless and silly. Maybe we should grow up a little and get back to work. Harrumph!

Let us say that on a daily basis the Shopbot shall be referred to by the ubiquitous and efficacious appellation 'The Bot'. However, formally, for signing checks and stuff like that The Bot shall also have a proper name.

In homage to Scott Adams I present... 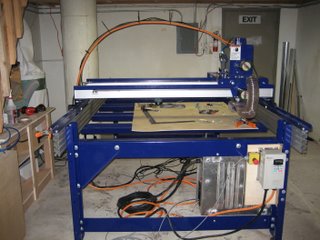 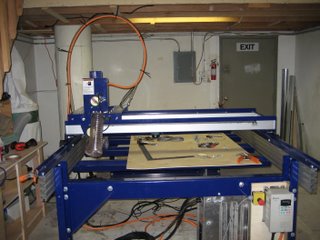 Since last April, Ian and I have been working on starting up a cnc millshop.

In July we secured a great space in San Francisco. Then, last week, the centerpiece of our enterprise arrived in an enormous wooden crate just tipping the scales at about 1/2 ton.

The past week has been spent assembling the beast. The archetypical christmas morning toy assembly extrapolated to its absurd extreme.

We took our time and savored the process and did it right. Overall everything was very straightforward. Not always easy but for every problem which arose a solution was at hand.

Today it is ready to be hooked up by an electrician. When that happens we'll be in business.
Posted by Zomad at 12:37 AM No comments:

When I was 18 I performed a sight gag which made John Cleese laugh so hard he bent over and slapped his knee.
Posted by Zomad at 1:35 PM 1 comment:

I tend to be a binge reader. During 2005 my focus of this excess was Fuller. I'm still not done but at least I'm reading other things these days.

Thanks of course to the internet my interest in geodesic structures and polyhedral forms quickly led me straight to Fuller. Before that I might have been able to say, 'wasn't he the dome guy?' which is about all I get from people most of the time.

Turns out there is much, much more to the contribution that this man made. I'd go so far as to maintain that he's as yet a still somewhat undiscovered messiah. When the dust has settled people will look back and realize he said it first but nobody was listening.

Fuller was a philosopher and a poet. 'Specialization is slavery', he said. Yet in our modern world who doesn't want to specialize. How else are you going to make a lot of money?

I don't think there's anything wrong with being very, very good at something. But when the price paid for that skill is to the extreme detriment of other skills and virtues then there's an unhealthy imbalance. Society inculcates us with the opinion that academic specialization is the highest virtue. But the successful, professional academic is also trapped. Perhaps he must relocate in order to get a job in his field. Perhaps he's become so focused on his particular field that he find himself ignorant of much else.

To Fuller being a comprehensivist was a higher virtue. And he doesn't mean knowing just a little about a lot - he means knowing a lot about a lot. It's not that hard if one applies oneself.

In the '70s Fuller was outspoken regarding the myth of scarcity. Even now, in 2006 with over 6 billion people we can say that the Earth could easily support us all if only we were'nt so stupid with our efforts. Read 'Grunch of Giants' for the original conspiracy theory.

And then there's his math, Synergetics. I'm still working on this one. Fuller's fundamental tetrahedral coordinate system which provides an alternate geometry for describing natural phenomena. Suffice it to say that within it is contained a wondrous world of truths to which most everyone is blind. Simplistic or sublime - with Fuller the two are often synonymous.

Zomad says think outside the tetrahedron.

This text weighs in at 253 sections spread over 1171 pages. No light read but well worth the time and effort. It's illuminating and insightful in regards to how design science techniques can vastly improve the quality of life within an environment, how underappreciated this point of view is and how poorly modern society performs in fostering the values espoused.

Having worked as a professional software engineer for many years I was already familiar with design patterns in software architecture and I knew they'd somehow originated from a similar organizational hierarchy in structural architecture. I bought this book not realizing that this was very much the Book that started it all.

The word Language in the title is very relevant. A Language provides one with a vocabulary with which to label objects and events within a system. The grammer of the language establishes a framework from which to organize and create an internal model of the system. Without such a language it is almost impossible to even think about a system in a meaningful way. Without a symbolic language the objects and events perceived in a system are a nebulous aggregate of impressions, visualizations and feelings. A difficult set of tools to work with. Alexander has created an example of a language which describes a specific architectural value system. One which he proposes we'd all be much better off to follow that not.

The vocabulary of the language is in the title of each of the 253 chapters:

...a small sampling. To each is devoted a summary, an illustration and an argument as to why the pattern is important and good. By and large I agree with Alexander's reasoning and his conclusions. Living in an urban environment in which I'm surrounded with many examples of good and bad, pleasant and unpleasant, well designed and well built juxtaposed with utter crap - this book gave me a way to understand why I like what I do and don't what I don't.

I've stopped trying to get my friends to read this book. But if you want to understand why a well designed community, home, threshold and porch are actually better for you than their counter examples then this book pretty much says it all. You will then be more empowered to actually do something about it.

For is it better to gobble goblets of globular cobbler or to cobble global kibble baubles?
Posted by Zomad at 8:49 AM 1 comment: