Zonotopia and the Two Trees 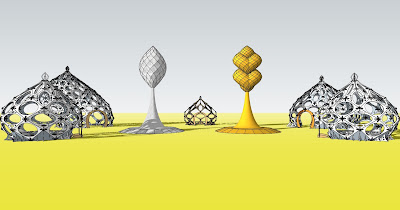 I'm very happy to announce that our Art Grant proposal for Zonotopia 2012 has been accepted and for the first time we are receiving Honorarium status as well as financial support from Burning Man!
This is great and welcome news. On the Burning Man website you can read:
"Every year Burning Man allocates a percentage of its revenue from ticket sales to funding select art projects that are collaborative, community-oriented and interactive. We do this in order to support the Burning Man art community, and to facilitate the creation of outstanding art for Black Rock City."

The entire Zonotopia crew is immensely excited to be given the support and resources to help create an amazing experience on the playa in 2012. Thank you to everyone who has supported this project these past three years. And thank you to our supporters at Black Rock City. 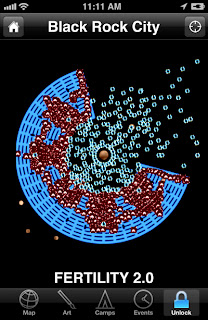 
"Black Rock City is a kind of Petri dish. Theme camps cling in fertile clusters to its latticework of streets, artworks tumble out of it, like pollen on the air. These nodes of interaction mutate, grow and reproduce their kind. Burning Man communities have now escaped this capsule world: our culture in a Petri dish has effloresced - it spreads across five continents. This year's art theme contemplates the tendency of any being or living system to create abundant life."

As some know, the Zomes such as I design them have two fundamental influences. The first being, the famous, Buckminster Fuller, who through his unprecedented impetuousness thought that he could change the world and actually did. The second is architect Christopher Alexander, author of "A Pattern Language". Where Fuller aspired to house all the peoples of the earth in shining aluminum domes and factory produced Dymaxion homes emphasizing minimum inventory with maximum volume, Alexander espoused essentially the opposite. 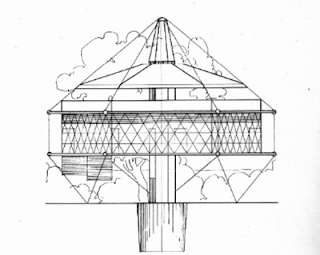 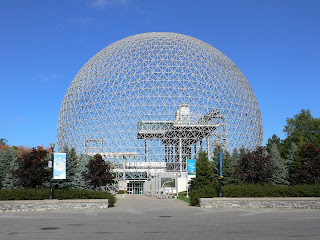 Fuller's vision
To Christopher Alexander, shelter, community and society are all deconstruct-able into patterns of design each of which, for better or worse, shapes the quality of experience for everyone at all levels...be it from the quality and quantity of parks and waterways in your neighborhood to whether or not your child has a secret hiding cave under the stairs. It is this aesthetic quality of design and the science of applying that design that Alexander cares about. In his trilogy called "The Nature of Order", each titled "The Phenomenon of Life",  "The Process of Creating Life" and "A Vision of a Living World", he declares and defines the concept that the terms Life and Living apply to created objects as much as to animate entities. That is to say that when a thing is designed well and intentionally with the same principals observed in nature such as levels of scale, slightly off center, self similarity, etc..., then that thing begins to become alive for all intents and purposes.

Alexander's vision
Many of my design decisions for the Zomes are based on my interpretations of Alexander's aesthetic and how one might increase this "livingness" of a structure. I'm not always able to quantify how or why this works but it certainly seems to.
All of the Zomes of Zonotopia will return to the playa in 2012 with some exciting new additions. 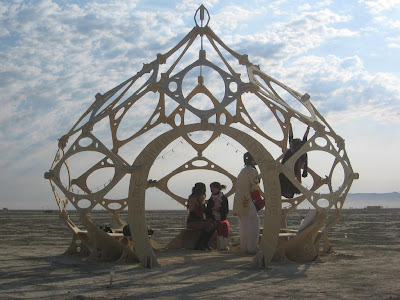 The Original Bodhisattva Zome will return to the playa for the fourth time. 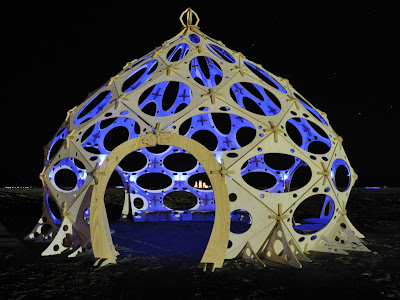 The 2010 Zonotopia Zome will return to the playa for the third time. 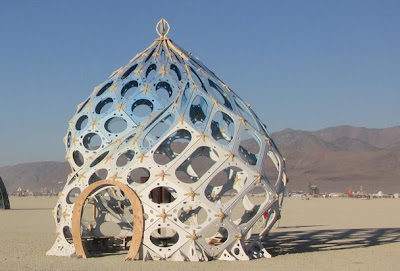 The Miracula Mirabilis will return with more parts to spiral even higher into the sky. 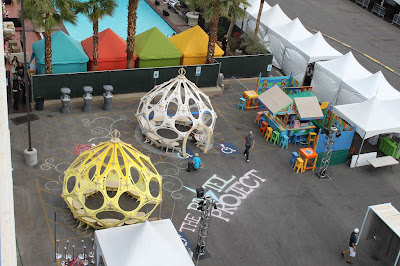 ..and two new Eight Frequency Zomes known as the Twins will make their Burning Man debut


All of the Zomes will create a circular courtyard the center piece of which are two giant zonohedral trees. 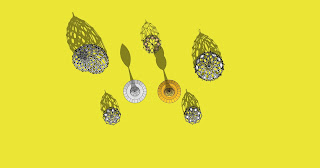 
Here's an excerpt from our proposal...


The Zomes of Zonotopia are jewel like structures carved from wood which seemingly have sprouted from the playa.  Each provides a beautiful well crafted sanctuary in which people can interact, contemplate and meditate. Each zome provides a different experience of space and enclosure.


Zomes are structural forms which create a magical quality of experience to the participants.  Derived from three dimensional projections of higher dimensional cubes, these structures embody a deep mathematical and geometric expression.


In keeping with the theme Fertility 2.0, this year in addition to the return of the Zomes of Zonotopia, which will be arranged in a circular pattern 70' in radius forming a central courtyard, there will be two dynamically illuminated zonotopal trees. The Two Trees of Zonotopia. 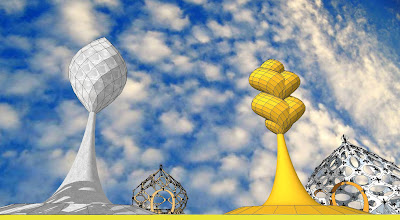 The Two Trees of Zonotopia


One of the most exciting new features to this years design will be improved lighting. In the past, Zonotopia has been somewhat sublime regarding night time lighting effects. This year, while we intend to again fully take advantage of our great successes with Wildfire blacklight paint and UV LED blacklights, we also intend to design, fabricate and program a number of highly dynamic and possibly interactive lighting experiences.

If you like what you see and you'd like to see more, please stay tuned for more details of this project as it progresses and to learn how you can be a part of bringing this manifest vision of zonotopal architecture to the playa!
zome mani padme zome
-Rob Bell
Posted by Zomad at 6:59 PM No comments: