Welcome to my Spaceship! Beautiful Forever. 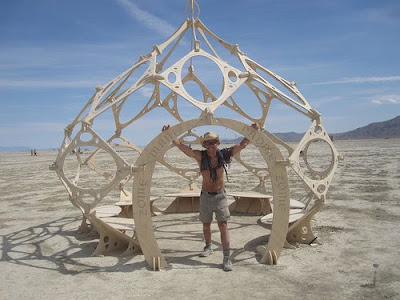 A giant Zome shaped thanks to everyone who helped to fund our Burningman 2009 Art piece: Evolving to Bootiesattva: Zome Mani Padme Zome.

The name is a mouthful and quite franky is simply what ended up on the application form. Like the structure of the Zome itself the names represent different facets of the same thing - the overlapping inside jokes and plays on words of the day; an amalgam of the irreverent and the profound. So, yes, but what is it really? 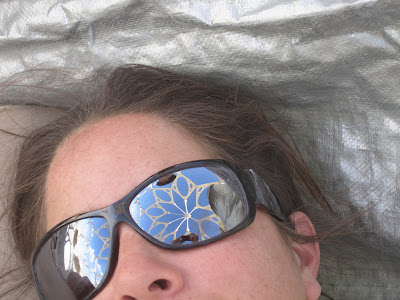 It's a Zome, a zonohedral dome, made entirely of wood. It's also a spaceship. It's a giant puzzle, the Bootiesattva, zome mani padme zome, an Artilect seed, an instance of a generative geometric cnc cut architectural pattern class, a Temple of Love, Sacred Geometry, a playa portal and gazebo.


Production began noon Monday, one week before the event. 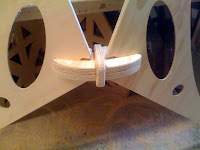 First joint
Part of the Art of the project was to be able to bang out a sizable structure with a very reasonable amount of time and labor. The production of the zome was completed on noon Friday. After approximately 30 hours of cnc cutting and shop labor the zome was ready. 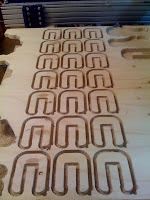 Cutting the clips
Assembly on the playa was hampered by dust storms and wind. It took a total of 8 hours to assemble the project - about half of which was spent sitting in the back of the truck waiting for a break in the weather. And another quarter of which was spent dealing with a handful of problem parts. With good weather and refined tolerances assembly should easily be under 2 hours. At least we were 100% done working early Tuesday which left plenty of quality Playa time.

It's a Temple for grounding, for meditation and healing; a space for reflection and introspection. It brings the outside in and lets the inside out. It's a manifest declaration of a living system - dividing Universe into two parts; the inside and the outside, yet maintaining the connection and allowing information to effortlessly pass thru it's boundary membrane. It provides an organic and harmonious context from which to view Universe and complementarily Self. Each of the benches provides a different perspective of the Playa and Sky through elliptically framed portals the multiplicity of which give scale and context to the outer vista. The feelings of being safely ensconced, wellness and omni-perception coexist withing the Zome. The Zome by Sunrise
The joy and wonder with which everyone received the Zome was a pleasure to witness. It was an additional pleasant surprise that most people noticed and appreciated the usage of all wooden cnc cut fasteners. From far and near the Zome was designed to intrigue and draw the viewer every closer as new details and structural patterns come into view. Emerging from the Playa

There is actually much, much more but it's still underground. Perhaps after a year of nurturing more will come forth and mature, gaining form and cohesion. And again each year until our spaceship casts off from the Earth.