The first of our fundraising perks for Zonotopia at Burningman 2011 is ready for distribution. It is our high res desktop image. This image is available to everyone who contributed . Thank you everyone.

photo by Kat Parry
Thank you one and all for making Zonotopia possible and great. This year I had the amazing good fortune of having the best build team at Burning Man. We were ten minds, ten hearts and twenty hands strong. Each and every member, five women and five men, focused all of their unwavering strength and efforts for three days under grueling conditions to create this manifest vision of zonotopal architecture. 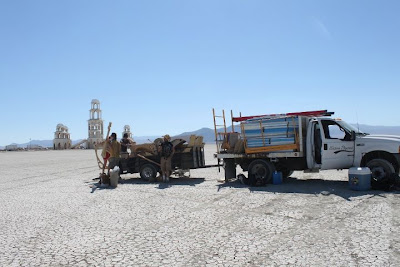 On a hot Friday morning at 10am, August 26th we were placed and began building in beautiful proximity to this years spectacular Temple. 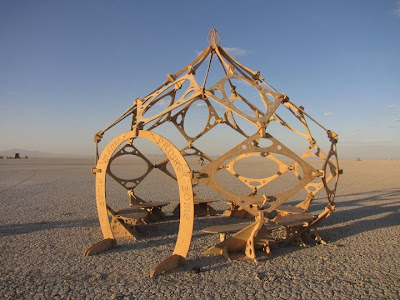 We began by building the every charming Bodhisattva Zome, this for the eleventh time. 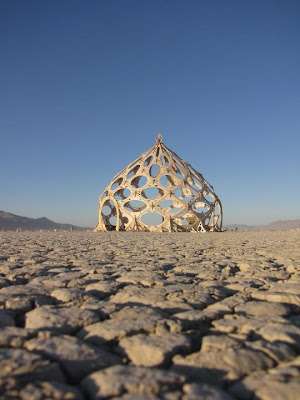 Before sunset on the first day both the Bodhisattva Zome and the 2010 Zonotopia Zome were fully erected and the Mirabilis was begun. 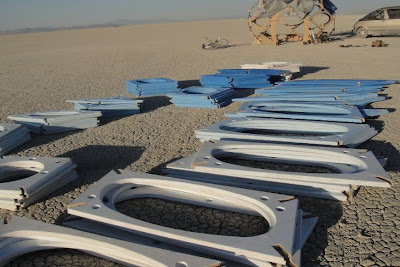 One Hundred Twenty Five panels and connectors, organized and ready to go. 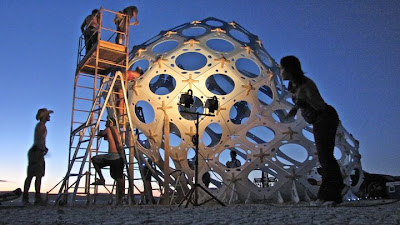 For three days, we worked all day and into the evening. 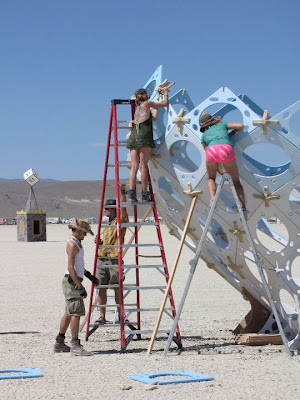 And here we see a typical example of the women industriously hard at work while the men stand around not doing much of anything. 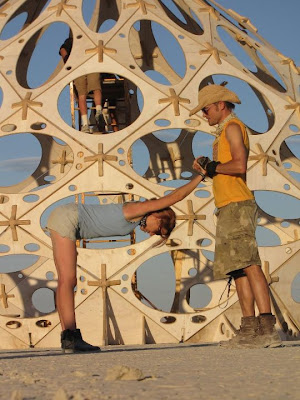 Here Zonotopians, Jeff and Val limber up during the build. 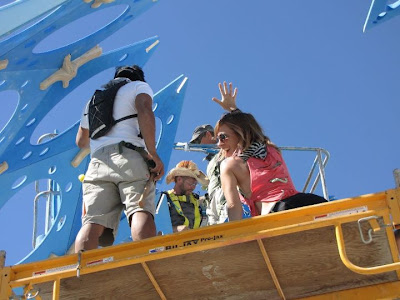 Almost all of Zonotopia is assembled using only scaffolding, ladders, mallets and muscle. 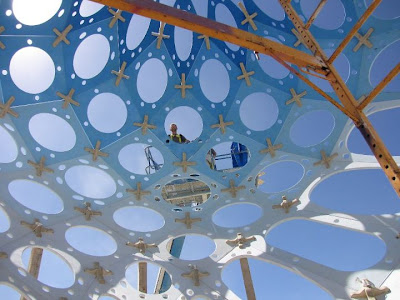 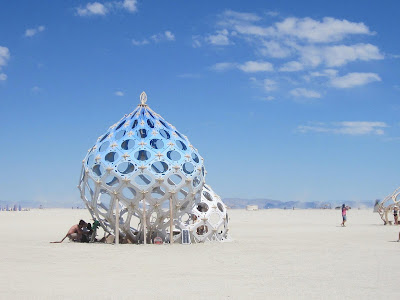 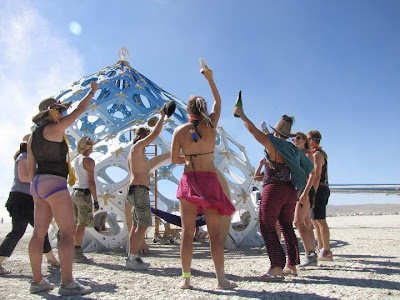 ...,a indigo color design which faded down to white, and most importantly of all.... 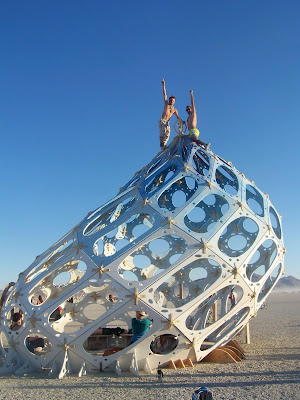 ...Climbability! As many can attest, it was solid and fun 5.0 wonderland! 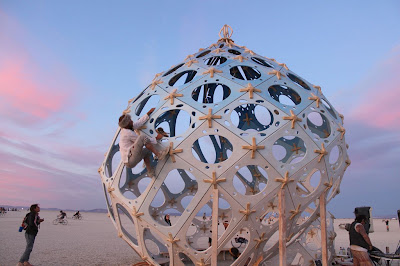 There are few things better in life than climbing your own art piece at Burning Man! 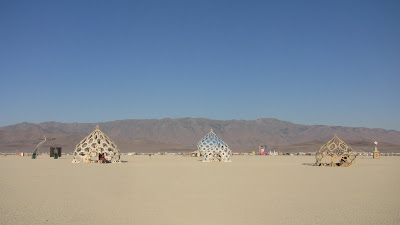 Each Zome provided a different visage and experience to all playa travellers. 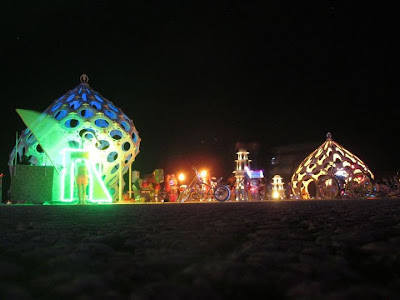 On Wednesday night, we hosted our third Annual Zome Party with Mission Country Club. There was great music and ... 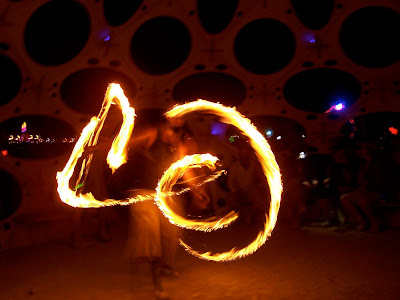 ....fire spinning in the Zomes. 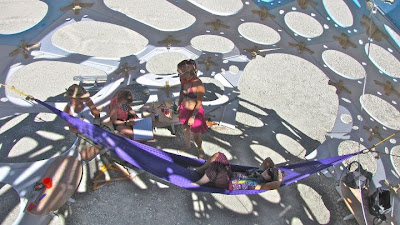 At long last, Patricia got her life long wish to chill in her hammock in a Zome. 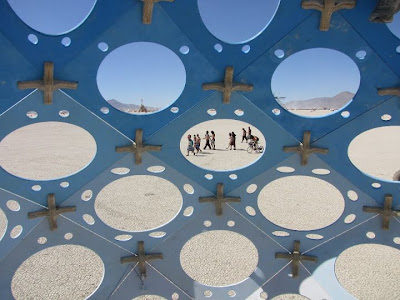 The fade to blue portals garnered no shortage of compliments throughout the event. And as predicted, there was always one row of panels which perfectly matched the sky. 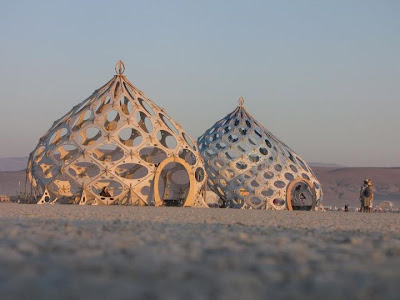 The Mirabilis came out at 25', just a bit taller than the 2010 Zonotopia Zome. 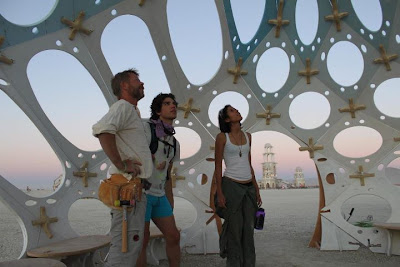 Intergalactic Zonotopians, Star Tiger and Sunshine stop by to admire the construction of their wedding chapel. 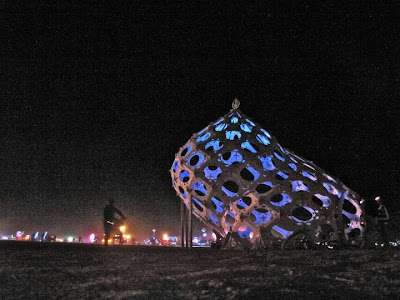 The Mirabilis at night, illuminated from within. 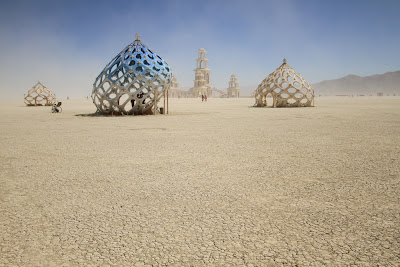 This is Zonotopia, the Once and Future Utopia of Zomes.
A giant Zome shaped Thank you goes to... 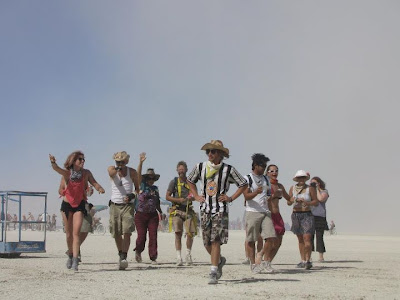