For the second time I got the privilege to speak at a Pecha Kucha event. This time it was for a fundraiser benefit for Japan and the theme was Inspiration. The event was held at Yoshi's in San Francisco. It was a great time and everyone's presentation was awesome. The format is 20 slides - 20 seconds each, so each presentation lasts just under 7 minutes...so here we go!


Zome Geometry and the Silver Ratio 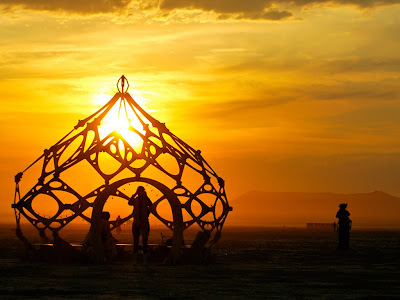 Hello Everyone. For about 5 years now I've been exploring an architectural space called Zomes.  My zomes are polar zonohedral domes and I believe that the space they create is very inspirational. I designed and built this pavilion two years ago and from my observations, everyone who experiences it feels the same.  And beyond the simple beauty of the structure I've discovered to my delight that the form is very functional. 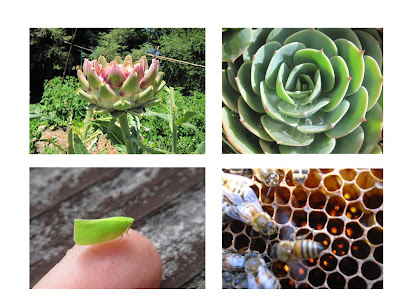 Nature has provided me with an important source of Inspiration. Natural architecture, living and inanimate, provides many examples of economy and function packaged in countless beautiful and varied designs.  I believe that were all designers to thoughtfully study what Nature has to teach we would all be better off. 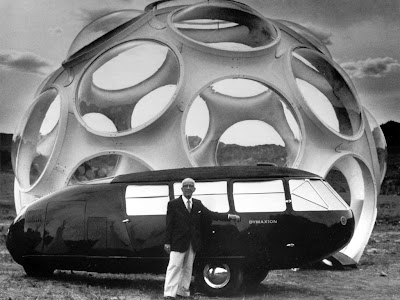 And people have also provided me with inspiration.  Buckminster Fuller, set an example of forward and free thinking that most of us can  hardly conceive. He provided me with invaluable ideas I would have never come up with on my own.  Not the least of which is that the  geometry we are taught in school is not exactly the way Nature works. 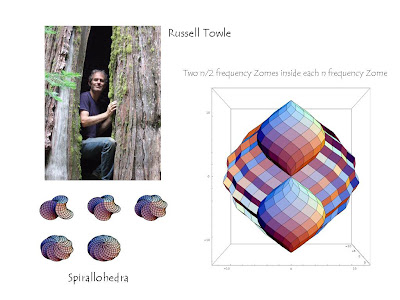 More recently I had the honor of corresponding with and being inspired by another interesting character, Russell Towle.  An autodidact, he surprisingly discovered a new and wonderful class of polyhedron called Spirallohedra which were secretly hiding inside of every polar zonohedron.  But then what is a polar zonohedron? 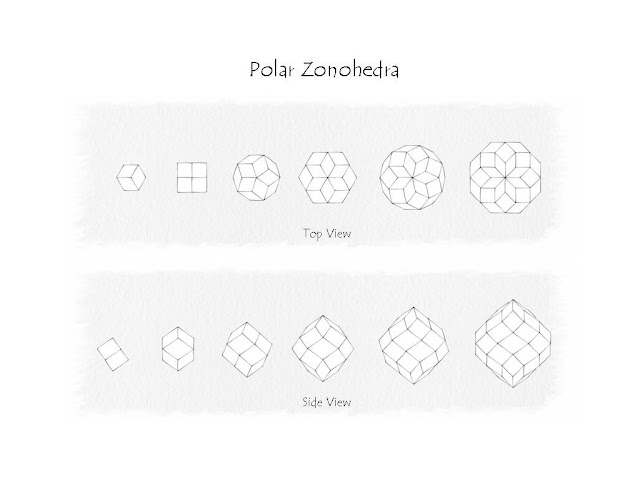 Polar Zonohedra are all around us and one of them is quite ubiquitous.  At the far top left that's a three frequency polar zonohedron also called a cube.  One can say that the frequency defines the number of dimensions of the polyhedron. So here we are looking at projections  3,4,5,6,7 and 8 dimensonal cubes. 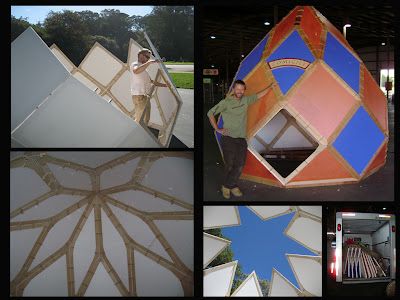 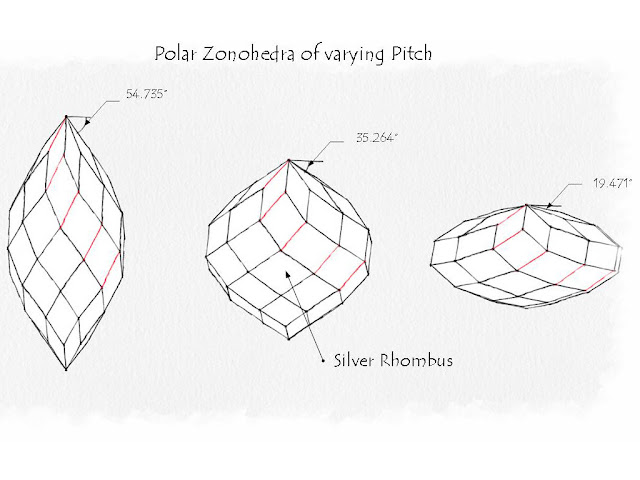 One can change the pitch to make the polar zonohedron tall and skinny or short and squat. Whatever you do each and every edge is always the same pitch as every other edge. That middle one with the Silver Rhombus label...that one is special and pretty soon I'll tell you why. 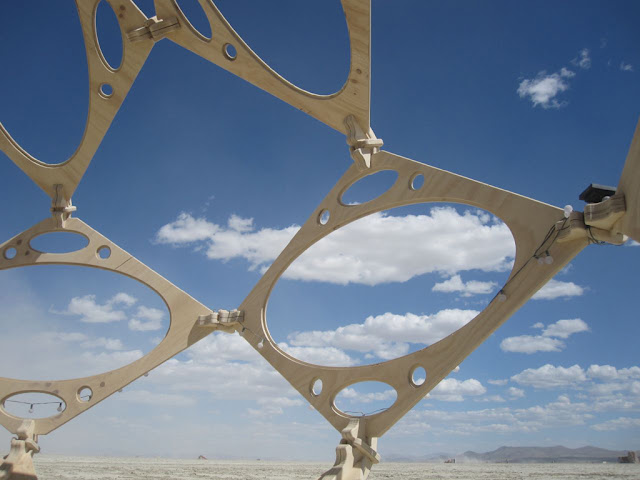 Sometimes something is so big that it needs to be framed to be put into context .  I think the Universe is like that.  So when people tell you to think outside the box, say no, I'd rather just increase the number of dimensions of my box - and in this case it is eight. 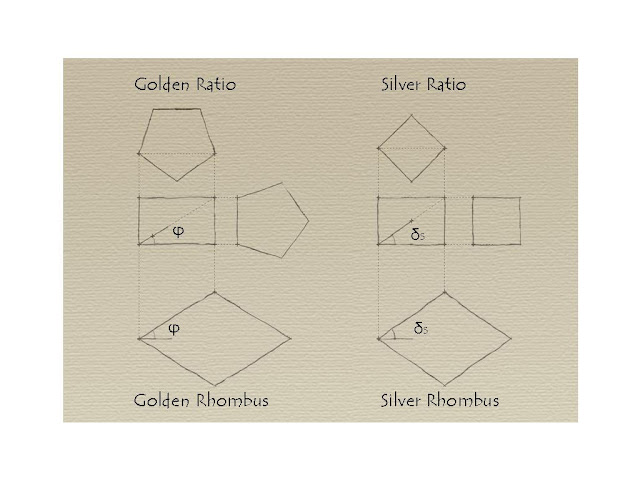 Many people know about the Golden Ratio. Here's a geometric sketch of how it is derived.  The silver ratio is lesser know but derived in a similar fashion - but using a square instead of a pentagon.  It's only at the pitch of the silver rhombus that polar zonohedra are perfect three dimensional projections of higher dimensional cubes. 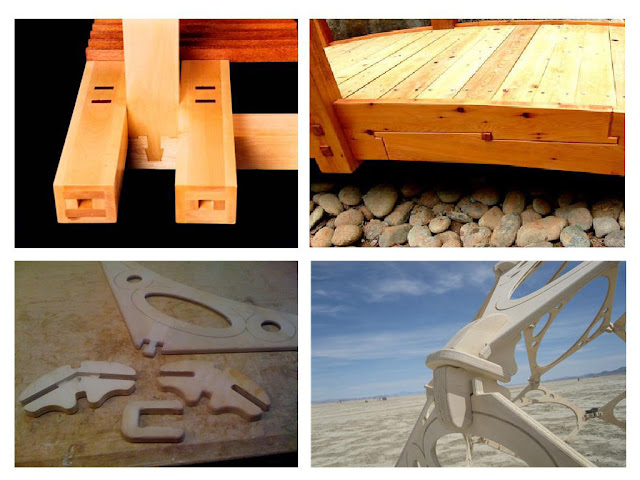 Here's another source of my inspiration. Japanese joinery!  I've been designing some of my own systems and techniques which will allow me  to build a strong and completely habitable structure using only interlocking fasteners. Here's one of my early working joint designs. 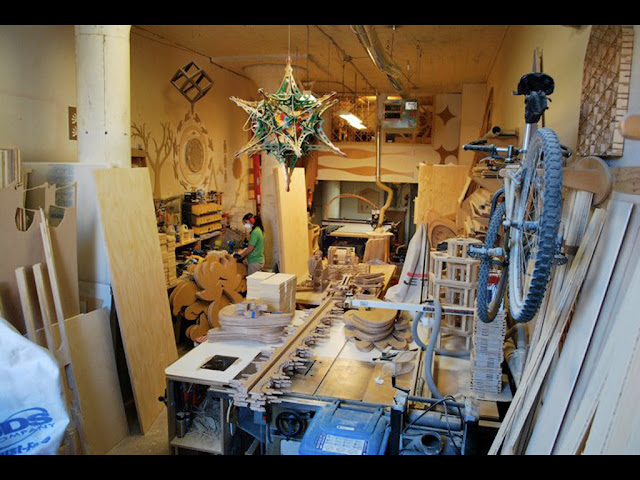 This is my workshop on a somewhat typical day.  There in the back you can see a computer controlled router. I use this tool for most of  my build work - that's the tool that makes most of this - if not sane - at least possible. 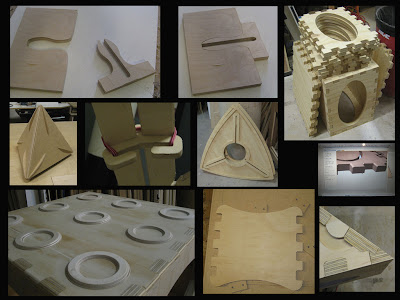 Good ideas in the computer sometimes just don't work in real life and conversely good techniques in real life can be very difficult to model.  So there's a lot of trial and error before success.  But I've found that persistence and tenacity will take you a long way. 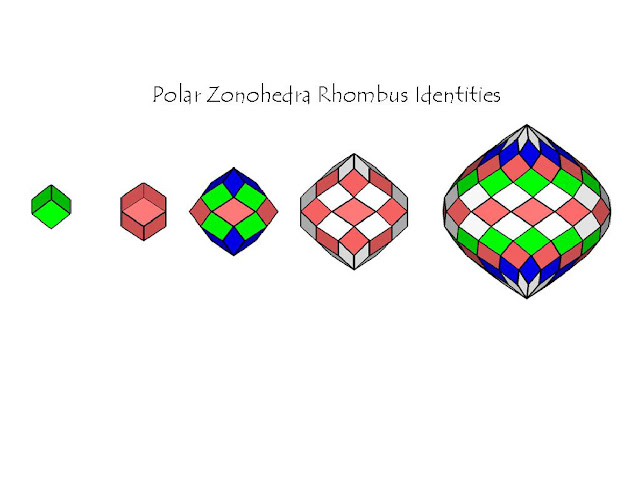 With the proper choices of pitch and frequency one can recombine rhombuses from two or more zomes to make a bigger one or conversely  take a big one, and rebuild it as two or more smaller ones. For example you can see those green squares on the far left cube get used again in the six and again in the twelve frequency zonohedron. 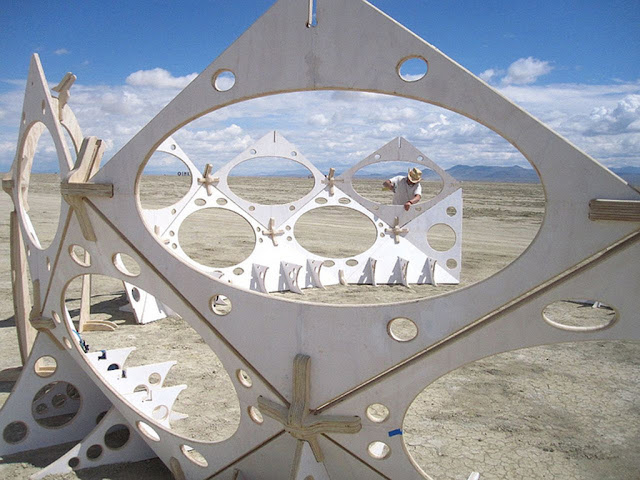 This last summer I took on quite the challenge. To build a twelve frequency Zome over 20'.  I had invaluable help from my friends. We fabricated all the parts and drove them to the desert without having had time to see if it would actually work.  Here I am applying a little persuasion to a tight joint. 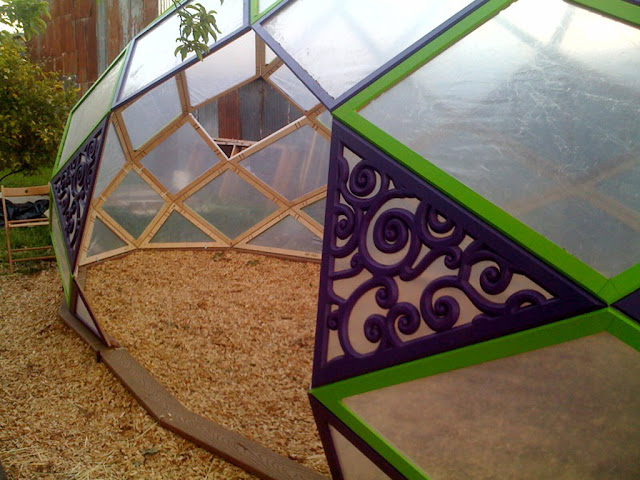 I have had some wonderful building successes. This was beautiful zome greenhouse my partner Patricia and I built together. An elongated  twelve frequency structure in which each panel was tongue and grooved into it's neighbor. But this new project was another matter altogether.  And the new joints had only been tested in my shop. 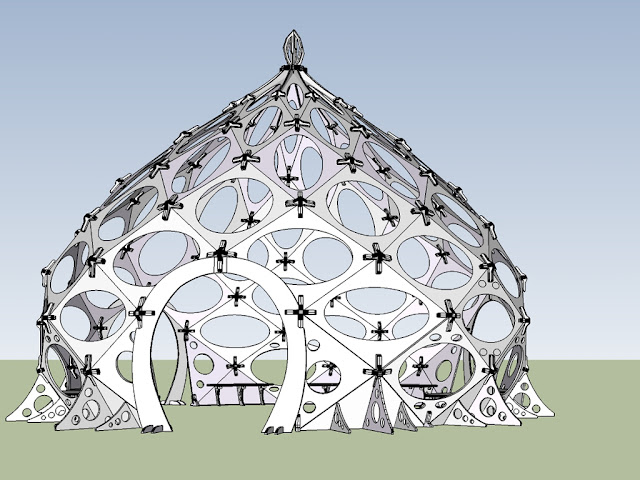 Here's the digital model of Zonotopia. I've written some parametric design software which automatically generates all of the parts there's but still plenty to pay close attention to and lots of places to go wrong.  It certainly looked cool here - but would it look cool there - and more importantly would it work? 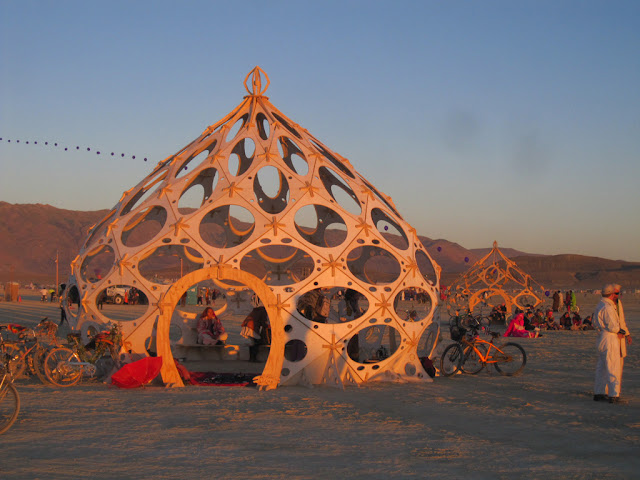 It did!  It took countless times up and down a ladder but we did it and we did it with mostly our bare hands. I love how the Rising Sun creates cresents of shadow light from across the structure. Everyone else loved it too. 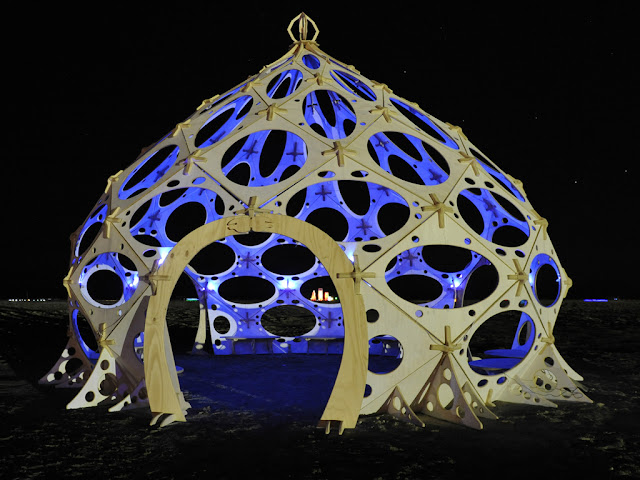 And at night we illuminated it from within with white black-light paint and LED black lights. The effect was astounding and ghost-like. With three doors, nine benches and 84 portals Zonotopia was almost always occupied. 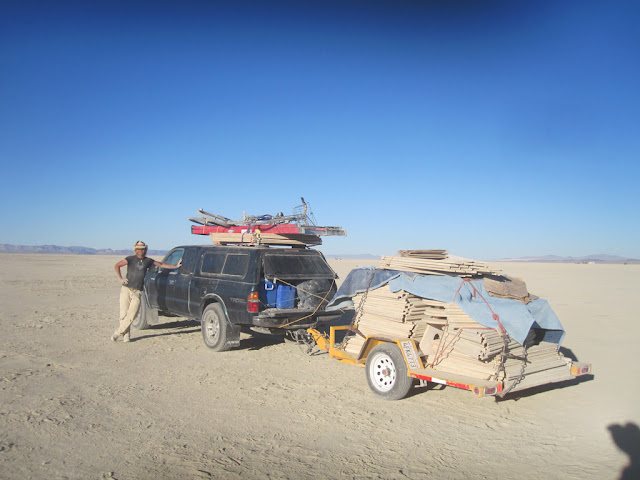 And here it is again - all of it - along with my ever dependable Toyota truck. The truck and I have been together for 187,000 miles - that's the same distance light travels in one second and I don't think I could have done much of this without it. - thank you Japan. 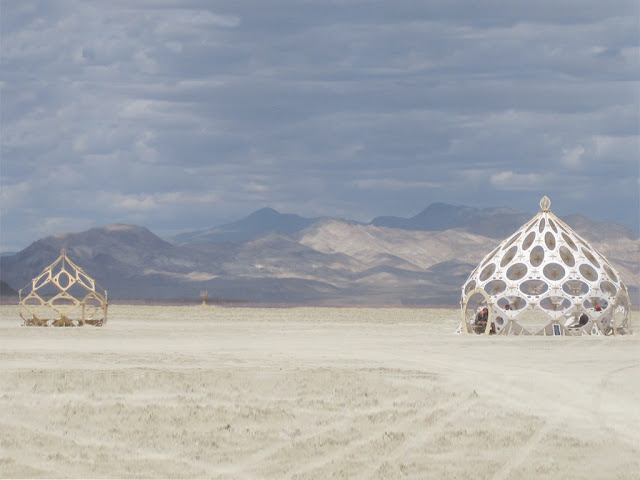